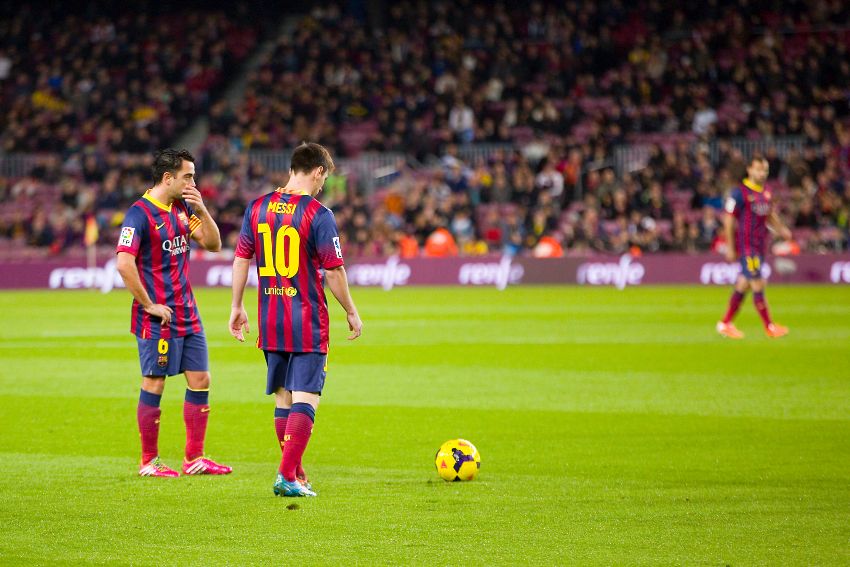 As a soccer player, I’ve played in many positions before, however, N° 10 is among a few positions that I didn’t occupy! However, I’ve played with many number tens and have watched & analyzed a ton of high level playmakers …

… In this article, I breakdown the role of this position as well as all formations it can fit in, in addition to the kind of attributes you should have to be successful at such a role!

What is the number 10’s role in soccer?

Players whose main role is to organize the game of a team usually wear number 10 in soccer!

Ten is a synonym for a player who is characterized by great technical ability, dribbling and a finishing pass.

These players are characterized by creativity and are considered true virtuosos on the field. Number 10 is the attack architect of a team and he is often the player that is a crucial part of every attacking play.

What will be the movement, the flow of the ball and the tempo of the attack, depends on the player with this number on his back.

In which formations do the number ten fits into?

This formation has 4 midfielders in a rhombus, 4 defensive players and 2 attackers. Here the position of the ten is behind the two strikers.

His role is to connect the lines of the team and create chances for his attackers. This formation brought huge successes to AC Milan with Kaka in the position of the classic ten.

In this formation, in addition to the classic ten, there are four defensive players, two back midfielders, two wingers and one striker.

The last two midfielders are in the role of safeties to a player with number ten. The role of the ten here is to create a surplus in the middle and distribute the ball not only to the attacker but also to the wingers.

In this formation, the player with the number ten has a huge radius of movement and his role is to find cracks in the defense and send the ball forward to the side players and two attackers.

This one has 3 players in the central part of the defense, five midfielders, two of whom are offensive side players, and two attackers in the front.

The ten here is positioned between the last two midfielders and the strikers. His role is to allow the ball to flow from the last line of the team, to the attackers.

In addition, in this formation he should distribute the ball to the side players also, who have a task of making crosses and joining the attack from the background.

Attributes that the number 10 need to have …

Ball Control – players with the number ten must be characterized by the skill of quality handling the ball. When the ball is in his possession, the ten must control it well and keep the close control of it. From his ball control, often depends on the success of attacking movements.

First Touch – the most important technical feature of a successful number 10. Without this technical element, all other attributes lose their significance. With appropriate first touch, the player can quickly gain control over the ball and send it to his teammates as fast as possible, and with adequate precision.

Passing – represents the skill of ball distribution. The passing needs to be precise and usable for a teammate. This is the core of number 10’s play, as his main task is to create a chance for his teammates and exploit empty space on the field.

Dribbling – represents the player’s ability to get past the opposing player with appropriate ball movement. A successful duel game and creating a surplus in the middle are in the description of the players characterized as number 10. High level of dribbling ability allows them to fulfill these tasks.

Technical ability – players must feel comfortable and have great ball handling skills at small spaces. The point is, if he can command the ball, he will be in position to make use of it.

Agility – allows players to move around in a quick and flexible manner. Players with appropriate agility are able to use the small space available, which is essential for number 10, as these players are often under pressure and surrounded by opposing players.

Body Balance – number 10s are exposed to contact play all the time. During the game, they have a lot of duels with opposing players and that is why this attribute is desirable. They must stay on their feet after the opponent’s tackles, in order to ensure continuation of the play.

Stamina – they have a huge radius of movement and a position that is characterized by frequent roaming from initial position, which depends on conditions on the field. As the game of a team depends on them, these players are the ones that must play the entire 90 minutes.

They constantly have to look for free space and stay open for their teammates, in order to receive the ball. These tasks require a lot of running and changing of pace, which makes stamina one of the essential attributes.

Anticipation – represents the skill of reading the opponent’s game and ball position. They have to look for cracks in the opponent’s defense in order to create a chance for the attackers.

Decision Making – must anticipate each individual situation on the field, acknowledge all the factors and conditions, and make the right decision.

They have the task to take advantage of the moment of carelessness in the opponent’s defense. This requires a lot of field analysis, and quick decision making, which makes it a feature of intelligent players.

Creativity – visual perception of the play and the implementation of original solutions on the field. He must be one step ahead of everyone on the field and know what to do with the ball before he receives it. It is not easy to pass the ball through well-placed defense, which requires a playmaker to find some unusual ways to create a play.

Flair – it is an instinct of the players to find the best space to use for offensive actions. This is an instinctive ability, and can be practiced during training sessions.

Composure – a player should maintain his calmness and focus during a duel game, even when under pressure.

Determination – often from the energy and motivation of this player, depends the success of the entire team. He is the leader and playmaker of the team, and must encourage his teammates not to lose hope when the result is not in their favor.

Due to his huge impact on a team, he must keep a high level of determination and resolve.

You can learn more about what makes a great soccer playermaker …

What is special about the number 10?

The playmakers and the best players of one team wear number 10. This number on the back carries a great responsibility.

Players who are artists on the field and who have often represented all the beauty of soccer as a game wear it.

High-class players, ball virtuosos and masters on the field carry the number 10 on the back. These are the players that make the audience come to the stadium, the ones who can resolve the match with one move.

Is the false 9 and number 10 the same position?

However, the number ten is in charge of organizing the game of the whole team, while the false nine returns for the ball towards the middle of the field and in that way pulls out the opposing defensive players and creates empty space in their defense.

The number ten represents the playmaker on the field, while the false nine is in charge exclusively of distributing the ball to the attackers.

Is it possible to build a successful team without the number 10?

In the past, players with the number ten on their backs had a huge amount of freedom without defensive tasks.

However, modern soccer, which is quite dynamic and demanding, does not allow the luxury of playing only in the attack phase. Due to different tactical ideas, some coaches decide to play without the classic ten in formation.

Precisely because of the defensive tasks, these players were transferred to the position of another striker or to the center of the midfield.

Diego Armando Maradona was a tremendous and effective dribbler with a perfect vision of the game. He could do everything with the ball and with his skill earned him the status of a deity in Argentina and the city of Napoli.

There were many headlines talking about his ball handling, claiming that it was almost impossible to take the ball away from him. One of the technically most powerful players in the history of soccer, a true leader on the field.

Ronaldinho is a player of enchanting ball technique and lucid moves that the whole world admired. With unbelievable ease, he defied his guards and drove the opponent’s defense insane.

Completely unpredictable with great ball control and a great finish. This technical skill allowed him to make use of empty space in front of him, creating a surplus in attack and passing the ball to his teammates.

Leo Messi is for many people around the world the best soccer player of today. A player with great dribbling and lucid solutions.

He is characterized by great intelligence and the amazing ball control skill. His technique is so superior that he has been named the best player in the world for six times.

He is the name linked with Barcelona’s success in the last decade, being the leader of this team.

Many famous players who wore the number ten on their backs have marked the history of soccer. Certainly, Pele, Johan Cruyff, Zinedine Zidane, Michel Platini, Francesco Totti and many others should be mentioned here, as the examples of classic number 10 players. They were leaders of their teams, playmakers responsible for the organizing of the play, and players that people around the world admire even today.

This position is also crucial for coaches who want to build their team based on a specific formation and tactics! Indeed, they usually do that around their best player on the field which is usually the playmaker and/or number ten …

… That’s why, teams that have a high quality level playmaker usually end up doing pretty well, especially if the coach knows how to get the most out of him by applying the right tactics!

Finally, I highly encourage you to learn about the number 8 soccer position! You’ll find it really helpful …